Dancing in the Corona Vortex

1- Cover Page includes this abstract, Daniel’s biography, and the Table of Contents with links.

2- Rings of Affinity was written early in the pandemic, well before vaccines were available and details Daniel’s suggested strategy for rebuilding social circles from the “grass roots” using expanding “rings” of safe, known contacts. This idea of “rings”, is also now in common use as “bubbles” or “pods”.

3- Casa 62 House Protocols- Daniel’s pandemic house “ring” included 9-12 different people at a time during the course of the pandemic. A group that was never meant to be bonded together in this way, and which was large enough to close in on the CDC’s limit for numbers permitted for social gathering, developed a set of protocols for safe behavior as we shared a living situation. This was pre-vaccines!

4- Casa 62 Adding New Rings of Connection- a house guide for linking with other social circles.

5- Casa 62 Levels of Risk- s the nickname of our group house. This document was shared guidance on how to negotiate making new in-person friendships. Also, pre-vaccines.

6- The return of Social Dance. Daniel’s advice to organizers, teachers, dancers and students.

7- Daniel’s solicitation of support for the creation of a Social Dance Program in Academia. A plea for the relevance of Non-Competitive, Interactive Somatic Education. 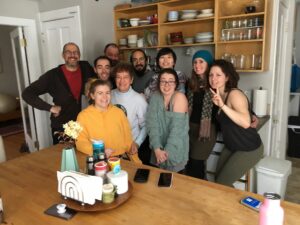 I have spent the whole of my adult life struggling to understand why modern society in the developed world has moved away from living in family groupings/intentional communities, and why I have grown to prefer it, and actively moved my life towards its revival.

My grandparents were that generation of Jews who, after surviving Russia, Europe, and the World Wars settled in NYC. Their children, my parents, then, following WW2,  dispersed across the USA, escaping from the confines of Jewish ghetto life, which the previous generation had brought with them from Europe. My parents, and their siblings and cousins, chose an assimilation into middle class, white, American suburban culture over the woven fabric of Jewish extended family life.

What they inadvertently produced for their children, my generation, was a culturally barren, business focused existence, one of workaholism, and keeping one’s political head down. We, their children, were the resulting generation spoiled by their economic success, suspicious of endless work, lonely for trusted circles of comfort, and with deep cravings for art, music, creativity, and love.

Somehow I knew, from the time my adult consciousness individuated from their goals for me, that something of deep abiding love, and family life, had been abandoned by my elders. I didn’t blame them. Their families simply did not provide the kind of support, and acceptance of change, and diversity, that were required in America. They chose to leave something which had nurtured them in big groups as children, and to make their way as individuals, never realizing that their own children would grow up in the failed experiment of the American suburb, craving the extended families they’d never had a chance to have.

I’m not sure how I knew. It was the 1970s. The free love and music of the 60s was prevalent, and we experimented with intoxicants. Those who were lucky created spontaneous networks of supportive friendships which became important relationships. We indulged in romance, promiscuity, used effective birth control, and ignored STDs until AIDS came along in 1984 and sobered us up quick.

Somehow I heard the drums. My early obsession with sports, which was really my father’s thing, dissolved in music and dance. The competition and maleness, giving way to movement for movement’s sake, emotional connectedness and love. Sex having been tainted and made dangerous, gave way to alternative extended family life. Friendship. Creating the circles of affinity and support where there was little or none remaining from our elders. I became more and more immersed in Community building through dance, starting with Modern and Post Modern American forms like Contact Improvisation, Swing Dance, and body work, but eventually being called to Argentina and Cuba, and becoming a channel for the revivals of Tango and Salsa Communities. I travelled for 20 years, visiting more than 100 cities on four continents, before landing back here in Massachusetts in 2002.

Not everyone danced socially, but for those of us who did something special happened. It turns out that interacting in intimate ways, ways driven by feelings rather than only lust, created a different kind of bonding, one more fleeting than the blood family, but one dependent on a more conscious choice. That means that these alternative family structures, while they work, do not have the same lasting character as blood family. Rather they ebb and flow, disperse and return, recycle and renew, or become only memories.

I wanted to form a dance commune with like minded folks, and tried in the 80’s, at Earthdance, in Massachusetts, where I was a founder who never fully joined in, because my professional dancing had started me on a 20 year international tour. By the time I returned, Earthdance had morphed from a commune into a non-profit retreat center. The original crew having dispersed into smaller nuclear units. Rather than becoming part of one rural dance community, I had obtained my Masters of Education working on Dance Ensemble as a community building tool, and I had spent my 20 plus years on the road teaching these tools to dance communities in more than 100 cites.  When I eventually settled in Massachusetts, I taught them again, for 16 years, at the Five Colleges here.

My parents were older and failing when I moved here in 2002.  I didn’t like the idea of putting them in an institutional setting, like so many American families do. Having lived in Europe and then Argentina, I had been exposed to how extended blood families in more traditional environs care for elders in multi generational housing, and I much preferred it.

Taking our time I negotiated with my folks to pool our resources and buy a home in 2008, which would eventually have 10 bedrooms, numerous group spaces, outdoor spaces and a dance studio. Having no extended blood family of our own, I decided to populate this home with a non-blood extended family, and so far during our 13 years of residence, about 50 people have lived here, the average stay being for 2-3 years, but with a few for both longer and shorter terms. Both of my folks have passed away here. Now that they are gone, the community has evolved into a full time dance house, which was the plan for after my folks.

This is not how I would have imagined creating a group quarters household, but as I never connected with others who wanted to share investment, I settled for this hybrid system of landlord/tenant and community household. There are pros and cons when compared to a true communal residence, but in many ways it has been made easier because I was committed to group life, and being the sole owner has given decision making and practical decisions much more efficiency and ease. It only works well this way because I am, and remain, committed to respecting and empowering the people who live here to participate as extended family members. It’s like it’s Grandma’s house, and I am now the Grandparent.

Much of my experience here was already a success by 2019, and I had begun writing a series of books on “alternative lifestyles”, including descriptions of creating such a household, caring for one’s elders in an alternative extended family, having a child as a known donor to a single mother by choice, exploring alternative relationship styles and the accompanying changes in safe sexual behavior, and managing a hybrid group living arrangement, one that allows us to more effectively share resources, and support each other emotionally, in ways far preferable to the conventional suburban design we are surrounded by. (Each month I get a letter from the electric company telling me that I use about twice the electricity of my average neighbors. But I house 5 times as many people as my average neighbors. You do the math. This lifestyle allows us the benefits of modern American consumption, while also with the feeling of being conscious contributors to a more just community.)

And then came the Pandemic.

The pandemic shut down my professional life, teaching dance, organizing dance events, and being a professor and coach at the colleges here. It also locked in my present group of 10-12 housemates, a situation which I had not planned for, and which, according to the early pronouncements from the Public Health officials, put us at much greater risk because, ironically, we had many more vectors of contact than our average neighbors.

Because of the unusual nature of our communal living arrangement we were forced to negotiate a series of evolving house rules, and because we were doing it together, to experience the lock down very differently than most of the people we knew. We were 10-12 in a space ship.

And as the leader and landlord of this group, and a professional social organizer to boot, it put me in a unique position to assess the greater society’s response to the epidemic, and to provide a different perspective from a group household’s existence.

The result is this suite of 5 documents about group living written during the pandemic, and which I am now publishing here together, in the Fall of 2021. In addition I will include a 6th document, which is a proposal for Social Dance in Academia, an idea whose time and relevance has come, and will hopefully manifest in the post-pandemic innovation of Campus life.

The first is this Introduction.

The second is called “Rings of Affinity”, and it was first published in June of 2020. It provides a philosophical basis for rebuilding social networks in a “grassroots” manner, avoiding the pressure to reboot the economy, and rather suggesting the safe application of overlapping rings of safest contacts. It does not suggest riskier behavior than the CDC, but it does suggest a different path to regaining trust. It’s over-arching concept is inline with what became the “bubble” or “pod” concept so many are now using. This is the place to start reading.

Third- House rules. This was created during the pandemic, over the course of regular “family” meetings within my alternative extended family of 10-12 people living in our group house. This was an evolving, living, document, which has grew and changed with the pandemic. It represents our pre-vaccine protocols.

Fourth- Negotiating new Rings. This check list of guidelines, helped us negotiate safe sharing of space, and breath, with people and groups outside of our own bubble. Also pre-vaccine history. As with the house rules, this living document is still grew and changed as we moved forward during the pandemic.

Fifth- Levels of Risk for activities outside of our inner or house ring.

Sixth- The Return of social dancing. This document is designed to bring awareness to the need for a deliberate, patient, slow, and safe step-by-step return to social dance activity. One that protects us from the unsafe nature of large random dance encounters, while at the same time defying a path for serious practice, and the honing of community wide dance skills in small safe committed groups.